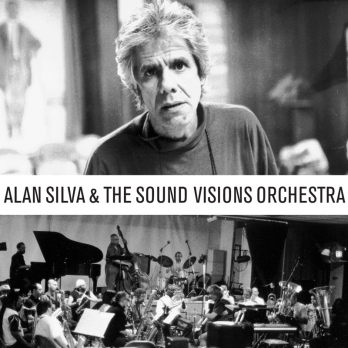 on his second c/d for eremite records, alan silva is back in front of an orchestra for the first time on record since 1982's desert mirage (i.a.c.p.). an iconic figure in the avant-garde for three decades, silva's contribution to the methodologies & vernacular of large ensemble improvisation is enormous. his three album 1970 byg recording seasons is universally regarded as one of the high water marks in avant-garde jazz. silva's orchestral pieces offer a broader view of his mad genius than perhaps any other context for his music, revealing an artist of uniquely american themes & sources, informed by the legacies of ives, ra, ellington & mingus, developments in the visual arts (namely abstract expressionism & experimental film), & a preternaturally warped response to the post-wwII american popular culture of show tunes, film music, radio theater & cold war propaganda. sound visions orchestra was recorded during the 1999 vision festival, a rare chance for silva to work & extensively rehearse with a band of experienced improvisers, & again present his orchestra music on native soil (a first since 1968). the band's festival performance was plagued by every imaginable technical difficulty, including complete power outages & exploding television sets. they re-assembled in an empty hall one week later to play the spectacularly expansive music heard on this recording -- resolution 57!

Make no mistake; this is first and foremost religious music. Every sound from the 24-member band, every gesture from conductor Silva serves an extra-musical purpose --creating a sonic analogy to a mystical experience. The sheer roiling volume, density, and fullness of tone created by the massive ensemble fills the listener with a powerful sense of the infinite, a sublime combination of awe, dread, and unearthly ravishment. Listening to the orchestra at full voice is like staring into the sun: searingly bright details team over the surface, then soloists explode out from the central mass like tongues of fire and collapse back into the inferno. In music like this, individual contributions are almost incidental to the overall impact, but there are peak moments and outstanding soloists worth noting. The duet of trumpeter Roy Campbell and saxophonist Sabir Mateen elevates the music near the start of "Visions 1." Later Karen Borca's bassoon soothes the music as it descends from the heights. Kidd Jordan is a towering presence, first in a duet with Rob Brown during "visions 2" and later as primary soloist in "Visions 3." Silva seems at the mercy of a more powerful force, a puppet of the creator. During "Visions 2", he speaks in tongues with a shocking intensity that the instrumentalists mimic in a startling call and response. During "Visions 3, he shouts "the pyramids, the pyramids, the pyramids" in a hallucinatory frenzy. The gaudy colors of his synthesizer flash through the ensemble at times, inspiring the band to flow in new directions. The entire album is improvised and Silva not only spurs the group to a closer auditory approximation of mystical union, but his gestural conducting shapes the collective improvisations, controlling dynamics, rhythm, texture, and color. Under Silva's guidance, "Visions 2" features some lovely orchestrations, such as the reeds behind french horn Mark Taylor, and the ensemble's rise and fall in the last five minutes before the bass trombonist Bill Lowe and tuba player Joe Daley gently usher the music back to earth. This is irrational, excessive, beautiful, flamboyant, grandiose music, a paean to creation and a divine conception of humanity.

I want you to take your sound and.. throw it against that wall over there!" i recall Silva once memorably coaching his students at the I.A.C.P. in Paris, waving a fist the size of a basketball in their faces. These days bassist Silva prefers to play synthesizer (woe betide you if you haven't got a copy of his In Situ masterpiece In The Tradition), but when his 23-piece Sound Visions Orchestra is in full flight, we might as well be back in the glory days of the Celestrial Communication Orchestra. Poet Steve Dalachinsky follows in the hallowed footsteps of Amiri Baraka, Hart Le Roy Bibbs and Sunny Murray, while Silva puts his star-studded cast through the paces. It doesn't take long for Sabir Mateen and Roy Campbell to start slugging it out for real, the ensemble surging and wailing from the ringside. Steve Swell goes a few rounds with Raphe Malik before a heavyweight tussle between J.D. Parran's bass sax and Joe Daley's tuba. The bruisers finally leave a little space for Karen Borca (the only player i've heard who can make me take the bassoon seriously) and the elastic rhythm section of Mark Hennen, Jackson Krall and Wilbur Morris. Silva, like nobody else i can think of except perhaps Cecil Taylor, knows just how to set ensembles on fire. Forget cute hand signals — conduction Silva-style also involves blood-curdling tribal war cries. No easy feat, then, recording two dozen monsters on the rampage — earlier Celestrial albums also suffered in this respect — but Michael Ehlers can be proud of this one: sheer power more than makes up for what clarity is (inevitably) lost. The Silva synth explosions that propel the second section into the stratosphere are spine-chilling, and Kidd Jordan comin' at ya screaming from the abyss is right up there on the thrillometer with Arthur Doyle's Alabama Feeling. Play this mother loud and let these guys throw their sound against your walls.

This album's liner notes are excerpted from a piece Marion Brown wrote about the spirituality in John Coltrane's music, which gives some indication of where Silva wants sound to take you. But this aint no booshi-woshi, wick-dicki (thank you, Charlemagne Palestine) metaphysical mush. Spirituality involves crisis & struggle, cosmic bodies collide & explode. Silva & company's music is as overwhelming as a super nova, as alarming as a face to face encounter with the angels. This is one orchestra that truly deserves the name, 22 members strong, it broadcasts a big big sound. Silva plays a little synthesizer on this date, but mostly he plays the ensemble via gestures & (quite audible) exhortations. He directs it to generate dense sound masses & detailed aural topographies. I haven't heard any of Silva's european recordings,on which he's documented several large-scale improvisations over the decades, so the best precedents i have for this record are Sun Ra's & Cecil Taylor's large scale evocations of chaos. Which of course aren't really chaotic at all, but aural wide screens that depict action on a grand scale. Things happen everywhere at once, & events in one part affect those in another. The first time i played this record, it hit me like a cinder block dropped from a three flat's rooftop; heavy, devastating, impossible to process. Only with repeated listens, have i been able to separate out some of the micro-events, to unearth the gentleness & subtlety & sensuality that courses beneath the surface like aquatic creatures going about their business unperturbed by the typhoon whipping up the sea above them.

You might call this the reinvention of the big band, except that a few pioneers, including Silva, have been experimenting successfully with this vehicle since the 1960s. Recalling his large orchestral masterpiece, My Country, recorded on the adventurous Leo record label, Silva gathered some of the cream of the east coast avant-garde for this huge production. Silva is described in the leaflet as performing on synthesizer and "conduction," which suggests that he led the ensemble with hand gestures in the manner popularized by conduction pioneer Butch Morris. The results are loud, brash, brassy, and violent, pulverizing with squalls of power. As with most conductions, the orchestra is a bit ragged, particularly on what are the written or pre-rehearsed parts, but the force and magnitude more than make up for any deficiencies. All three parts of the composition are laced with plenty of solos, which explode with giddiness. Guests Kidd Jordan and poet Steve Dalichinsky add extra verve, with the former the sole soloist on "Part III." There are a few somewhat pastoral moods, particularly on the last section, but these, too, are subsumed by undercurrents of dissonance. This is a majestic and magnificent recording, and if it is difficult to listen to at one setting, it is nonetheless worth the effort.

Alan Silva tackles one of the hardest gigs in free music, which is the organization of a large ensemble. Here he's been equipped with 23 of New York's finest, including a poet, nine reeds, nine brass, piano, bass & drums. Using conduction & some unobtrusive synthesizer, Silva inspires a lively & aerated squall which gleefully follows his energetic gestural curlicues. Big discordant tuttis recall Michael Mantler's work with the Jazz Composers Orchestra in 1968, though there's more improviser humor than high-modernist earnestness here. This unbroken movement is much more vigorous than the classicising pieces being conducted by Butch Morris at the moment (where the musicians' individuality seems to be totally repressed). However, it's nowhere near as impressive as A Hero's Welcome (Eremite), from 1998, when Silva created a dazzling orchestra using just his synth &  William Parker's bass...this is a spirited suite of collective improvisations.