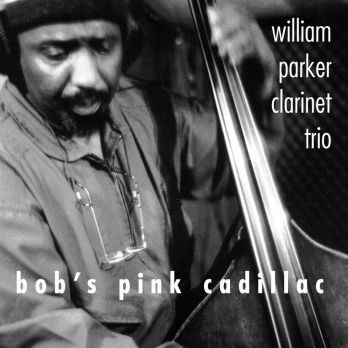 two c/d set, studio & live, of a new parker-led trio featuring two true jazz legends, wailter perkins & perry robinson. the terrifically resourceful perkins has done it all, from carmen mcrae to the art farmer/jim hall 4tet to roland kirk, sonny rollins, & his own group the MJT +3. & for those of you who agree that far too little of perry robinson's colorful playing exists on record after his totally classic 1962 savoy album funk dumpling & esp 1026 (henry grimes the call), you're suffering has just been eased. the man is still the last word for all the clarinet's possibilities in creative music. "the clarinet trio, we're going almost anywhere, but it's more rooted in the blues & folk, extending from the history of jazz. it swings, it sings and, you know, it stings. we don't know where it will go from night to night, but the basis of it is the blues" (parker).

The bassist calls this his Clarinet Trio, and it may be the best record Perry Robinson has ever made --his sound liquid, his disposition relaxed yet buoyant.  And what a kick to hear the veteran drummer Walter Perkins, who backed Roland Kirk so unforgettably on I Talk With The Spirits.  The first disc was made in the studio, the second live at Tonic, where from the moment Robinson enters on a continuous five-part suite, Parker alights with mingusian exultation and might.

What an inspired idea these recordings are, a unique summit of three wonderfully idiosyncratic improvisers. The ubiquitous Parker meets up with seldom-heard traps master Perkins & the great Perry Robinson, who i see as one of the great improvisers currently playing, regardless of instrument. But on his instrument, he is simply a master: his sound is dark & liquid, his lines are patient & lyrical, capable of the scorching abstraction of John Carter or the tempered explorations of Jimmy Giuffre. This is superb music, brimming with ideas & energy from the start. Perkins, known largely for his contribution to Art Farmer units, is perfect for this gig, goosing Parker in ways similar to Hamid Drake (Perk may indeed be an influence on Mr. Drake). Parker himself --who claims to have had the idea for this group in a dream-- is in top form here, proving what an adept interpreter of song & groove he is, aside from his well known talents for free music. The tunes on disc one groove in serious fashion, with the warm chalumeau tone of Robinson's clarinet wending its way through the open-air shapes thrown up by Parker & Perkins. The title track is a killer mid-tempo shaker, with a bluesy conclusion that adds the exclamation point, & it's exactly the kind of inside-out pleasure had all over these two discs. "Overcoat in the River" is more experimental, a presto-chango dash through multiple tempi (a proclivity this trio has, with its sharp reflexes &  eager exploratory sensibility). "Blue Flower" is a seriously deep blues epic, while "Fence in the Snow" is so elaborate & varied it could almost be an Ellington suite (though the Duke would probably never countenance the vocal & percussion outburst that occurs towards the close of the nearly-30 minute piece). Speaking of suites, the second disc is comprised of "Ebony Fantasy," a five-part journey recorded live at Tonic. All the gravity & rootsiness is carried over here (& one can hear why Parker considers Robinson to be the heir of masters like Jimmy Hamilton & Russell Procope, ducal clarinet masters, even as he takes his horn to places those fellows might never have imagined). Indeed, Parker writes in his liners that he considers this suite to Be something of an historical encapsulation/distillation of the music, with all its varied colors, structures, meters, & moods: the superb descending theme of part II is darkly romantic, while part III just swings its ass off. The under-recorded Robinson has been getting wider exposure in recent years, thanks to labels such as Eremite & CIMP, & this twofer is practically a clarinet textbook. Tone, timbre, & articulation are all here in abundance. But one of the things that kept knocking me out was Robinson's ability as a pure melodist. As the music rolls along in waves, this guy is continually inventive. The rhythm section is as limber as you could want: tight & loose, funky & abstract, supportive & challenging. Parker's virtues, on ample display here, need little elaboration at this point --suffice to say that in this relatively conventional session, he excels. but Perkins is a marvelous surprise here, the snap of his snare & sizzle of his cymbals a wonderfully distinct contribution to this group. I've gone back to this one quite a lot already, & i imagine you will too. I find it to be a sheer joy.

A splendid realization of Parker's long-standing ambition to work within the illustrious tradition of jazz clarinet. It ties together the essences of swing, free, blues & gospel with a scholar's acumen, a preacher's zeal & more rowdy fun than an Irish wake held on St. Partrick's Day.

Fueled by clarinetist Perry Robinson's eloquent vocabulary & grounded by Walter Perkins guileless work on the traps, Parker's licorice stick trio is perfectly symmetrical & obviously inspired. Lengthy performances like "Fence in the Snow" showcase Robinson's vast aesthetic range & Parker again shines on bass, digging deep into the more spiritual aspects of collective innovation. The second half of this collection is a live performance recorded at Tonic in Manhattan. Wide-open & joyously experimental, "Ebony Fantasy" is an hour-long improvisation that harkens back to the forgotten mysteries & early discoveries of avant-garde jazz.