Always Coming From the Love Side 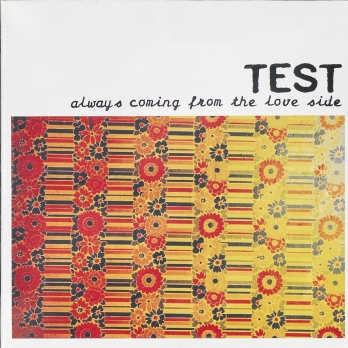 nyc free jazz cooperative TEST was literally an underground favorite --as part of the music under new york program in the 1990s, TEST was out on the street & subway platforms year-round, playing long-form unadulterated free jazz with an energy & creativity rarely encountered. even on a scene known for strong personalities these guys were renegade cats. eremite heard & recorded TEST many times over a ten year period; always coming from the love side, a two CD set from TEST's 1999 u.s. tour, captured live by malachi ritscher at fred anderson's velvet lounge just weeks before Y2K, is right up there among the band's strongest & most memorable performances. the cover photo, for those who don't recognize it, is of the velvet lounge's legendary wallpaper. other images include a peter brötzmann photo of fred anderson in front of the club (shot november 2005 just months before the building was destroyed by the city of chicago to build a parking garage) & tony getsug photos of TEST tearing-up the velvet's bandstand. edition 550 copies, presented in a tri-fold stoughton sleeve.

eremite dedicates this record to the memories of tom bruno, fred anderson & his velvet lounge, malachi ritscher & michael king, & to the legacy of TEST.

Taped at Fred Anderson’s Velvet Lounge in November 1999, this is a life-affirming set from one of the decade’s greatest free jazz bands. A collective group featuring Daniel Carter & Sabir Mateen on reeds, the late Tom Bruno on drums, & Matt Heyner of The No-Neck Blues Band on bass, TEST weave reed harmolodics & Ayler-esque folk fragments around ecstatic free drumming. Carter & Mateen’s interplay is sublime, from their initial weaves of trumpet & alto clarinet, through to their climactic saxophone communion. Bruno is an astonishing drummer, tuned to the multidirectional flow of Rashied Ali, while pushing the music forward with surging bop fills on the snare. Heyner anchors the music with a clear sighted sense of harmony & pulse. At times, the music reaches such a joyous pitch the players will break into song, riding Bruno’s waves of liberated rhythm with gospel calls, field hollers & street chatter. One utterly gorgeous passage see Carter leading the group into ballad mode, the tender passion of his saxophone trailed by the curling blue smoke of Mateen’s alto clarinet.

While the City of New York has changed completely and rapidly in the last two decades, one can still find small clutches of what the boroughs once offered – spots of renegade art and life buried beneath super-gentrification. The buskers beneath the streets are still in effect, though apart from a balafon and a few kora players, most notable these days are a possessed Beatles interpreter and a few drum battles. Yet the air around and under Astor Place where the 6 train stops still crackles with energy, resonating out of the white and brown tiles in the alcoves that once were a small amphitheater for TEST, a freely improvising unit consisting of drummer Tom Bruno (1932-2012), reedists Sabir Mateen and Daniel Carter (who also played trumpet) and bassist Matthew Heyner (NNCK). Supported by the MTA’s Music Under the Streets initiative, TEST performed regularly in the subways throughout the mid-90s and into the early 2000s, also playing concerts from the Vision Festival to the Whitney Museum of American Art. The band grew out of music that Carter and Bruno were making under Manhattan and all of the players save Heyner had been playing in the subways for years. In part if not in whole the music bubbled up from the community-oriented approach that characterized the NYC Artists’ Collective and 501 Canal Street, a loft which Bruno, vocalist Ellen Christi, multi-instrumentalist Cooper-Moore and saxophonists David S. Ware and Alan Braufman had occupied from the mid-70s.

There were never tunes or heads – TEST’s improvisations grew and spiraled out of one another, but always linked up in pulsating shimmies, “free” but with an ever-present loping, somewhat clanky groove. While most groups of the period – Ware’s, Jemeel Moondoc’s, Roy Campbell’s, William Parker’s – were compositionally-centered, TEST (and a few others) were completely open with both horn men switching between an array of saxophones, clarinets, and flutes. No matter how good the contents are, hearing TEST on disc is nothing like hearing them in their natural habitat, and of the four albums that were released during the group’s lifetime, only one was captured outside of the studio (Live/TEST, Eremite, 1999). One couldn’t feel the disarming contrast between pure expression and workaday indifference or occasional intrigue from passersby, bodies wrapped in action and deep listening against unforgiving concrete and steel. That said, it’s appropriate that these archival recordings were captured on a 1999 tour on which TEST played Fred Anderson’s Velvet Lounge in Chicago – the old space, on S. Indiana, which was closed to make way for new developments in 2006. Malachi Ritscher, who died the year that the original Velvet closed, recorded these five improvisations spread across two discs (they were mastered by the recently departed Michael King). Hearing Bruno’s dry, rolling chatter as a subtly thick constant around and behind the guttural staccato of Carter’s horns and Mateen’s crisp, keening baubles in near constant interplay, sometimes slashing and at other times in a relaxed loquacious swing, Heyner’s ropey pizzicato supporting underneath, is a marker of time and place. The back stage at the Velvet, low-lit, with a smattering of black tables and chairs and saxophonist-owner Fred Anderson unassumingly tending bar and door, is indelibly scratched into the memory of those who were there, just as one who witnessed TEST in a downtown New York subway performance never forgets it. Luckily these two strains of completely uncompromising artistic space were able to share an above-ground moment a few months before the Millennium.

With a title borrowed from one of drummer Tom Bruno’s ebulliently idealistic turns of phrase, Always Coming From the Love Side is a double-album nearly two decades in the offing that belies its protracted gestation period through assiduous optimism repaid. The gloriously garish wallpaper adorning the cover works both as figurative tea leaves predicting the titanic sounds within and an emblematic signifier for the storied venue where they were first loosed into the world.

TEST was always the antithesis of a button-down, starch collar studio ensemble. Their preferred habitat encompassed the bustling, chaotic streets and subways of New York City, competing vociferously with all of the kinetic noise and activity those most urban of environments could muster. Their musical purview was at once communal in design and uncompromising in its celebration of the energy music tenets advanced decades earlier by the first and second waves of the jazz New Thing.

Kindred reedists Daniel Carter and Sabir Mateen shared an arsenal of instruments and cumulative decades of experience between them in near-countless creative configurations. Bruno internalized the pulse percussion ethos of forbearers like Sunny Murray and Milford Graves with a preference for fractional kits over full ones, the better to hit and decamp with a guerrilla’s expediency. Completing the formidable foursome, Matt Heyner was the relative novitiate, a pupil of peer William Parker plucked from the city’s sister experimental rock scene and a steadfast recipient of the bass chair after a string of earlier contenders tossed in the sweat-saturated towel.

Eremite overseer Michael Ehlers was an instant convert and early booster of the band’s cause, booking gigs and eventually helping mastermind a shambolic tour. The artistic culmination of the latter endeavor came with a concert at saxophonist Fred Anderson’s Velvet Lounge on 11/13/99. Reportedly one for the books, the aural evidence here bears out the brio of the claim. The only thing absent from the packaging is a breakdown of the music’s temporal particulars, but that’s hardly a sticking point when levied against the period photos and accompanying Ehlers essay that brims with anecdotal erudition.

Sprawled generously over two discs and indexed into five sections, the nearly two-hour performance reaches escape velocity early. Carter and Mateen split off seamlessly into stereo channels and waste no time in blowing their respective guts out over a roiling, frothing rush of rhythmic crests and furrows. Heyner’s a bit recessed in the mix, his blurred strums going more for a visceral sum than clearly defined constituents, but his rapport with Bruno keeps a constantly restorative commentary going for the jousting horns. Signposts and detours are rapid and numerous, but it becomes the sort of marathon ride that rewards allowing the specifics to subsume in the service of a righteous, sustained deluge.

Far from a musty or antiquated artifact, the set is instead a vital time capsule of the era of free jazz renaissance that accompanying the final decade of the last century. Conventional wisdom contends that the best jazz music comes in concert form. TEST’s subliminal mission was to prove that adage incontrovertibly each time they took the stage (or subway platform or street corner), leaving stunned, sated witnesses eager to spread the gospel regarding the inalienable truth.