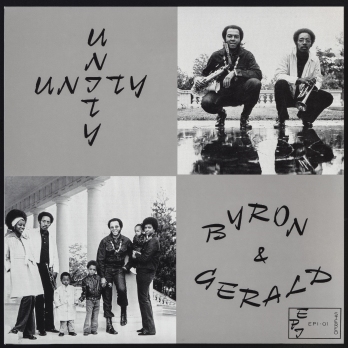 unity, by byron & gerald, is a long lost & highly sought-after private press free jazz album recorded in 1969 at howard university. encouraged by his friend joe mcphee (who contributed an 'invocation' to the back cover), byron morris made unity the very first release on his own EPI label (EPI-01, 1972). it is the only hardcore free jazz record out of 1960s DC, & a viscerally powerful musical & cultural dispatch on the aesthetic & sociopolitical upheavals of its time. eremite's edition exactly reproduces the original EPI release & adds new liner notes by byron morris. it is pressed on premium quality audiophile vinyl by RTI, presented in a heavyweight stoughton 'laser disc' sleeve with a hand-pulled screenprinted insert by alan sherry/siwa in an edition 550 copies. PROJECT PRODUCED WITH THE ARTIST'S FULL PERMISSION & COOPERATION. with mad love & appreciation, eremite dedicates this reissue to the musicians & aficionados of the 1960s & '70s american free jazz underground epitomized by byron & gerald, aboriginal music society, drumdance to the motherland, solidarity unit inc., black unity trio, mcphee's nation time, & so many more... you know who you are!

a brief technical note: the couple minutes of 'channel warble' on side 'B' of unity is native to the source. the private press underground realm is not mo-fi. technical imperfection was the norm.

"In the early spring of 1969, several months before moving to Poughkeepsie, NY, Gerald Wise & I, along with the recording engineer Len Jones, conceived of the idea to gather a group of musicians who were like-minded concerning "The New Thing" (Sun Ra, John Coltrane, Ornette Coleman, Eric Dolphy, Booker Little). Most of the musicians we asked to be part of this experiment we knew from jam sessions or were already part of Unit Five. Eric Gravatt suggested we invite two of his musician friends from Philadelphia, Byard Lancaster & Keno Speller. I wrote a musical composition for the date dedicated to my father, “JWM+53.” My friend Earl Snead wrote the other composition, “Black Awareness.” Earl passed shortly after the session.

The recording session took place at the studio of an experimental TV channel that leased space on the campus of Howard University. Gerry & I welcomed all the musicians and thanked them for being part of the session. The scene immediately took on a magical atmosphere, with everyone going about their tasks as if they had cue sheets. In the center of the room we laid out our instruments on two 4x8 tables. That way we could just pick up any instrument and play when the spirit hit us. I had two altos (one plastic) & a curved soprano. Jerry Wise had his trumpet & some hand rhythm instruments. Byard Lancaster had an alto sax, flute, trumpet & some hand rhythm instruments. Vins Johnson had a tenor & a baritone sax. Keno Speller had a bell tree, tambourines, claves, drum sticks, felt-headed mallets & a set of amplified conga drums. Inside the tables our two drummers, Eric Gravatt & Abu Sharrieff, sat face to face with two full drum kits & microphones all around them. Next to them were our two bassists, Fred Williams & a young man named Chris (whose last name, sadly, I cannot remember).

To this day, I wish the proceedings had been filmed. The energy level was so high that Byard Lancaster did push-ups when not playing (I believe I remember Vins Johnson & Keno Speller also doing some). In spite of all of the excitement, everyone wanted to make a serious musical statement & cooperated in taking directions from Len Jones, Gerry & me. It was orderly excitement, the collective "We" caught-up in the moment. Ornette’s Free Jazz & Trane’s Ascension (1965) address much of what we were attempting in the studio that day in 1969... Whew!!! Byron Morris, still looking for a time machine for a short stay in 1969!!! SMILES...

Each musician poured out their creative ideas with a great abundance of energy & spontaneous creativity. In all my life I have never again been part of a musical experience like this session. May God bless all the musicians, recording engineers & others who worked on this session, as well as those who worked on the final record album, Byron & Gerald’s Unity, released in 1972. Thinking about all of this now I am very humbled. Whew. Tears...

In point of fact, most if not all of us had witnessed firsthand the physical excitement &, in some moments, pure terror of the urban riots set off in the spring of 1968 by the murder of Dr. Martin Luther King, Jr.. Washington, D.C., exploded with anger & the looting & burning of businesses throughout the city. U.S. Army troops, along with Air Force and Navy/Marine elements, were sent in to quell these massive urban disturbances. During the recording of Unity our collective emotions were still raw, to say the least. Here & now, nearly a half of a century later, I can still smell the tear gas & the burning tires. I get chills just thinking about it. But the music got us through that time... & the music gets us through now!" (excerpt from Byron Morris's 2017 liner notes)